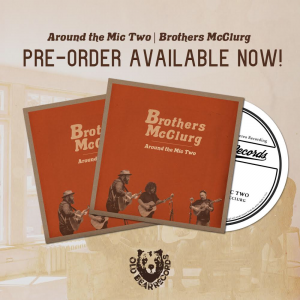 Today is an exciting day!  Our guys the Brothers McClurg are finally ready to release it’s first record in almost 3 years on September 20th.  They’ve been working hard on making a comeback record that will pick up where they left off with a brand new set of 7 songs titled “Around The Mic Two”.

This morning the guys launched a Pre-Order/Pre-Save campaign.  But here’s the cool twist if you pre save “Around the Mic Two” over the next week before its scheduled release on September 20th your name will be entered to win a free copy of the record along with a bag of our Old Bear Records Coffee!   Be forward the combo of this folk/gospel record along with a sip happy cup of OBR coffee is about the closest thing to heaven we’ve ever encountered! Trust us we’ve tried out the combo already and it’s true.

Alright!  So what are you waiting for go pre-save on spotify now! And pre-order it on ituens.